Maria Montessori was a fine educator, writer, and medical doctor, who over a century ago, developed a new approach for educating and nurturing young children. Dr. Montessori became the first female medical doctor in Italy who cared about the education of young children. She concluded through her observations and teachings that every child is an individual learner and should be encouraged to work at their own pace. She highly believed that educated children created a better society. Dr. Montessori has introduced a new philosophy that allowed children today to learn better when they are given the opportunity to choose and discover in their own way.

Dr. Montessori’s method of teaching continued to gain popularity throughout Europe in the early 1900s and today is practiced all over the world. Maria Montessori was a genius who was ahead of her time. She believed that a child’s mind from birth to six years was different from adults. She saw tremendous need for children to have respectful, stimulating, nurturing, and meaningful direction and guidance during what she called the “absorbent mind” stage.

Modern primary education derives its form largely from the pioneering Dr. Maria Montessori. It was Montessori who introduced child-size tables and chairs, lively colors and developmental learning games to children’s classrooms. And it was she who first trained teachers to approach early education as a cooperative endeavor in which they guide children not lecture to them. The Montessori movement has influenced early-childhood education to such a degree that there is probably not a day care center or kindergarten classroom in America that does not incorporate at least some of Montessori’s techniques and progressive ideas into its curriculum.

At Rancho Viejo Montessori School we approach each child as an individual, always respecting their physical, emotional, and educational needs through the use of the Montessori philosophy.

Here are a few Montessori books that might interest you:

How to Raise an Amazing Child by Tim Seldin

Maria Montessori: Her Life and Work by E.M. Standing

Or visit the following resources online: 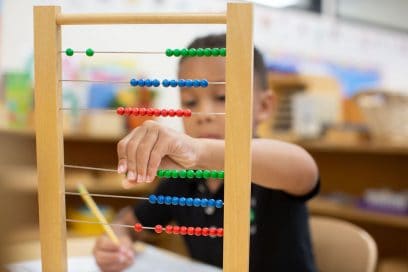